Ahhhh…. Florida… Fresh Orange Juice, Sunshine, Beaches, Football, Theme Parks…and One Big Gigantic Elephant. They say… elephants never forget… and boy, oh, boy I could not agree more.  I love Florida, but my head hurts right now.  No, I’m not even going to speak on the Sanford case(s)… you know what I’m talking about.  I just needed somewhere to share my thoughts freely… and since I know none of you personally, I think, it would not matter to me if you agree with me or not.

Do you know where I’m going with this??

I was recently on Facebook, reading comments to articles that have recently been posted. Having no opinion on the articles, themselves, I scrolled down to find out what others might have to say.. Being a blog reader, you probably have done the same, I assume.. It never fails, anything that has to do with an African American citizen… ANYTHING… is followed by hundreds of degrading, derogatory, and outright racist comments.  The thing is, I noticed one of the commenters was the cab driver that takes my son to his golf practice every week.  This man, who answers the phone “yes ma’am”, “how are you doing ma’am”, very politely comes across as a completely different person online.  How is it, that we can greet the people we meet with a smile, then turn to the computer and bare our ugly souls to people we think we will never meet in person?

I’m not White nor Black… but it hurts my heart to know that everyday normal-looking people, people I might wave to when I pass them in the hallway.. may have some dark, bitter way of thinking when they look at me, my children… or my husband… or (hopefully, one day) my future bi-racial baby.

I feel sad… My heart hurts.. The “Happiest Place on Earth” is just a façade, friends… And it feels like that big elephant is not going anywhere.

What are your dreams??

I’ve recently had a conversation with my 14-year old son… what do you want to be when you grow up?  His answer: a football player or music producer.  My first thought was, he’s getting too old to be “dreaming” .  What came out of my mouth was, “what is your ‘Plan B’?”

Now, what an awful thing to say, isn’t it?  “What is your Plan B??”  What a tarnished, grown-up, lousy response to a young, fresh-minded dreamer!

After all, I’ve had some pretty cool dreams in my school years..  In Elementary School, I remember watching my big sister with her High School Dance Team.  They were SO cool, with their big hair and sequined outfits dancing to Janet Jackson’s Rhythm Nation.  My best friend and I watched in admiration and plotted to be Dance Team Captains when we got into high school!  And we did…..  It was awesome!  WE had our own dance moves, our own style, outfits, and higher dreams to be Super Sonic Dancers!

In my Junior Year, I was all set for college.  I wanted to study Engineering (like my Dad).  Excited for my future, I had pretty good grades and was active in the community. And I was getting ready to start applying for scholarships…

Now, 16 years later, obviously, I’m not a Super Sonics Dancer (here’s to hoping we get our team back, someday!) and I’m not an Engineer…. However, I did manage to put myself through college. I have a decent job, nice little home, family, and pets.  But, that vision and anticipation for what the future may hold has singed by … what can I say…. “LIFE”! 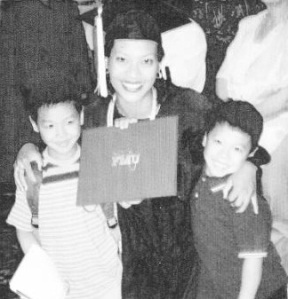 Will my son make big mistakes?  Will he have huge hurdles in obtaining his dreams?  No doubt, YES.  But, he’ll at least have the chances I never had to, at least, try.  Why let the obstacles I’ve encountered – though my own faulty decisions – affect my view of my children’s future?  It shouldn’t.

So, here’s to joining my son in his dream to become a football player, a music producer.. a TV star, a drummer, a break dancer (do they still have those?) whatever he wants to do!

And as for my own dreams… I am choosing right now to re-evaluate my vision.  Forget about that 5-year-plan! I just want to dream.. My dancing days are over, folks… no Orlando Magic Girl left in me… but, perhaps, instead of being a dancer, I can start that business I’ve always wanted.  Or own that “that’s my car” type of car, I’ve had my eye on.  Who cares what stage of life we’re in… we NEED to dream.  We need the anticipation of what the future holds..  and it’s there for all of us…  What do you want to be when you “grow up”?